Fascinating Facts about the Coffee Industry 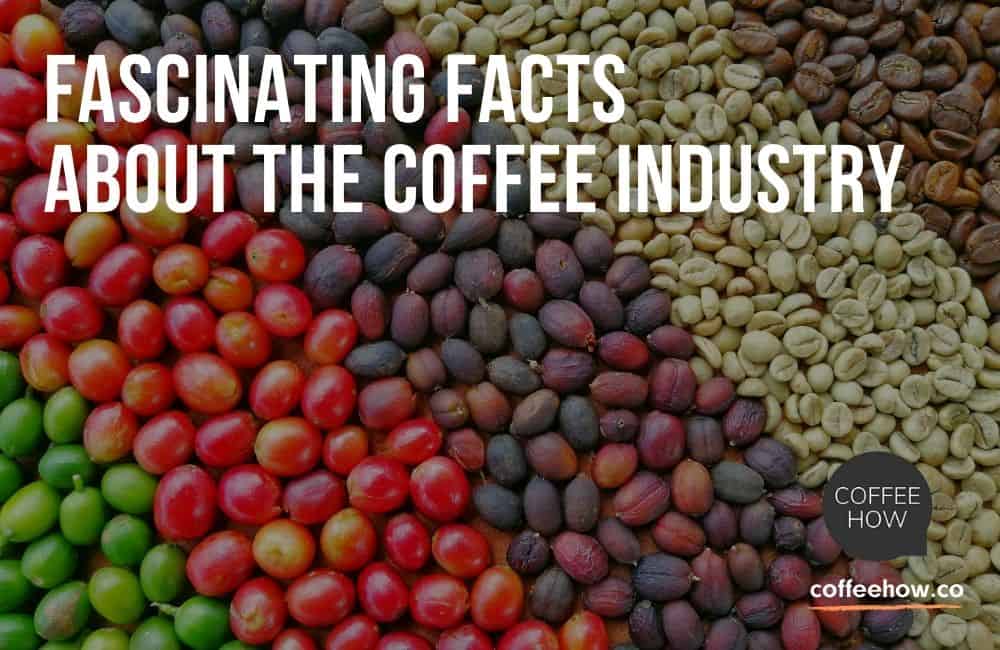 Coffee is one of the most popular beverages around the world. Millions of people across cultures start their morning with a cup of java.

So it’s not surprising that coffee accounts for some $20 billion in exports per year. We’ve researched some of the most interesting facts about coffee and the industry that supplies it to satisfy your curiosity.

Statistics reveal coffee is consumed in quantities greater than 25 pounds per year by individuals in Finland and close to 10 pounds per year by coffee drinkers in the United States, which is number 25 on the list based on consumption.

European countries consume almost twice the amount compared to the United States. Norway, Iceland, Denmark, Netherlands, and Sweden are high on the list at 18 pounds or more for each individual per year.

Investors and Traders Love Coffee Too

Coffee is a commodity that investors chase too. Common ways of investing in coffee include buying shares of coffee-producing companies like Starbucks Corp., Nestlé S.A., or JM Smucker Co.

Professional traders may buy or sell coffee futures on exchanges, something that requires considerable knowledge and skill. Amateur online traders can try their hand at buying or selling popular consumer-level contracts that track the price of coffee.

Consumed primarily by industrial nations and produced by less-developed countries, coffee is grown and harvested mainly in tropical and subtropical regions. Its commodity chain is extensive.

After production, it’s exported by large coffee plantations as well as by smaller producers via intermediaries. It’s then roasted, packaged, distributed, and sold by retail entities.

Jute bags, holding 60 kg of coffee per bag, are used to distribute the commodity after it has been harvested. One hundred fifty million of these bags are filled each year. However, a transition is being made to use one-ton polypropylene super-sacks as a replacement.

The largest importers of coffee include several countries in Europe, the US, Russia, and Japan. One-third of the total coffee produced per year is consumed directly by the exporting countries themselves, led by Brazil.

Brazil produces coffee by sun drying the coffee cherries. Other countries use a wet process to remove the fruit flesh before the beans are dried.

In the United States, it’s estimated that 1.7 million jobs are created by the coffee industry. Accounting for over 1.6 percent of the US GDP, coffee has an impact on the economy exceeding $225 billion.

Coffee plants come in two varieties. Arabica coffee production was close to 94 million jute bags in 2019-2020. Global production of this variety is expected to reach over 100 million bags in the following year.

The Arabica variety is mainly grown in lower and higher altitudes of tropical and subtropical regions. The lower altitude crops do best in altitudes ranging from 1,800 to 3,600 feet. The dry and rainy seasons in Jamaica, Mexico, and parts of Zimbabwe and Brazil are ideal for this type of crop.

Higher altitudes near the equator, ranging from 3,600 to 6,300 feet, are also prime areas where Arabica crops are grown. The larger amounts of rainfall help create two harvesting seasons, which can be found in the geographical conditions of Colombia, Kenya, and Ethiopia.

The other variety, Robusta, is a smaller bean that had about 70 million jute bags produced worldwide in the 2018-2019 year. Projections for the next year indicated an increase of one and a half million bags.

Robusta, a harsher tasting variety of coffee bean, is grown at much lower altitudes, which start at sea level and increase to around 3,000 feet. These coffee plants are more tolerant to the warmer weather found in these regions located just north and south of the equator.

Issues Affecting the Price of Coffee

Several factors are involved in determining the price of coffee, including geopolitics, climate, discretionary income, health issues, transportation, and oil prices. The two top coffee producers, Brazil and Vietnam, have a history of political instability, affecting factors related to production and exportation.

Coffee plants are highly susceptible to changes in weather conditions. A specific amount of sun and rainfall are required to produce the best results. If these two factors change, it can cause production challenges, which lead to lower supplies and a higher price. The effect of recent global warming patterns may also cause prices to head higher, especially if dry conditions in specific areas continue to persist.

Coffee plants are highly susceptible to changes in weather conditions. A specific amount of sun and rainfall are required to produce the best results. If these two factors change, it can cause production challenges, which lead to lower supplies and a higher price. The effect of recent global warming patterns may also cause prices to head higher, especially if dry conditions in specific areas continue to persist.

Caffeine is a significant component in coffee. Some people are known to have disrupted sleep patterns or anxiety due to a high intake of caffeine. If they decide to cut back on the amount they consume, it could lead to less demand, affecting supply and price.

However, coffee consumption is generally considered a positive element in people’s lives. In addition to its mild stimulative effects, it is known to have these positive effects:

Transporting beans around the world requires the use of oil. Fluctuations in oil’s price can have a direct effect on shipping costs for coffee. If any disruptions occur to the operations associated with oil production, it will likely lead to changes in the price of coffee.

Even with a fluctuation in prices and industry changes, it’s highly likely that people will continue to seek out and enjoy coffee.