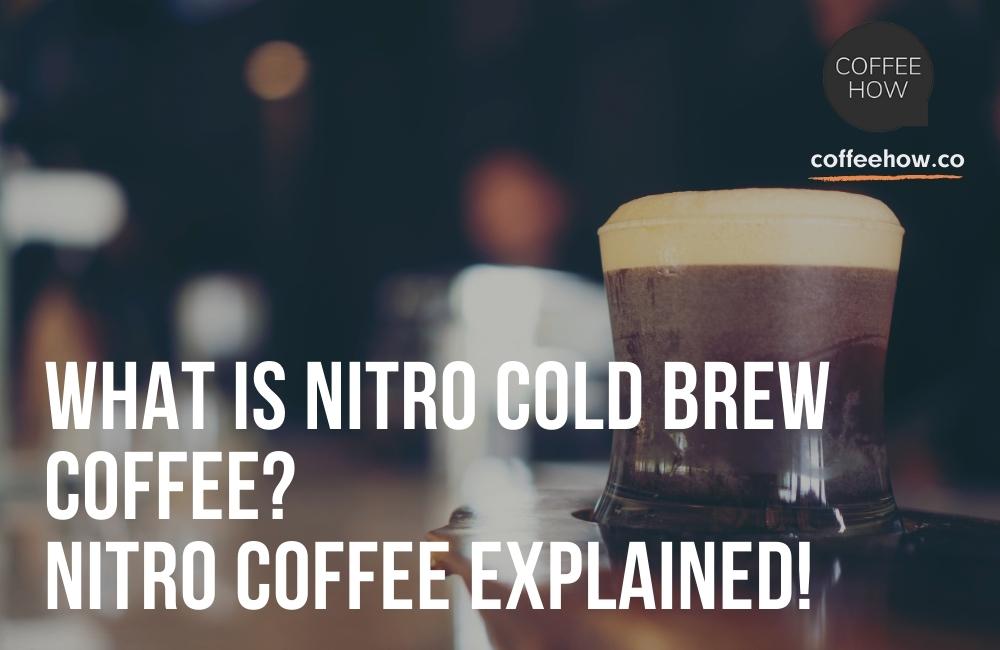 Nitro cold brew coffee is quickly finding its way into the menus of most coffee shops, and it is not without reason. Since it was first invented in 2012 as a third-wave coffee shop trend, the nitro brew has made its way into the mainstream, with coffee retail giants like Starbucks including it on their menu.If you have been wondering what is nitro cold brew and how it differs from other coffee types, you are in the right page. This article offers a comprehensive guide into what nitro cold brew coffee is, how it is made, its pros and cons, and how it differs from the cold brew.

What is Nitro Coffee and How is it Made?

Nitro coffee is a cold brew coffee brewed at cold or room temperature water for 24 hours and later infused with colorless and odorless nitrogen gas. By cold brewing coffee beans, you lower their acidity and increase their sweetness. On the other hand, infusing nitrogen into the cold brew gives the coffee a frothy, milky layer that creates a foamy top.

Simply put, cold brew coffee is nitrogenated like most beverages like soda, giving it characteristic bubbles. However, nitrogen-infused coffee is smoother than carbonated beverages. This is because nitrogen bubbles are significantly smaller when compared to carbon dioxide bubbles found in sodas.

The nitrogenating nitro coffee is usually done through a pressurized valve with tiny holes. Hence, nitro brew coffee is mainly served through keg taps. Nevertheless, you can use a cream whipper to make your own nitro cold brew at home or buy cans of nitro coffee from the store.

Nitro coffee differs from regular coffee in so many ways. Here are some of the major differences:

Unlike regular coffee, nitro cold brew coffee has a thick and creamy texture and a smoother mouthfeel. This is because tiny gas bubbles are added, unlike large gas bubbles found in other beverages.

Generally, coffee roasters help to enhance the taste and flavor of coffee beans. However, when compared to regular coffee, nitro cold brew tastes sweeter and eliminates the need for added sugar. Coffee brewed cold is naturally sweet and contains no dairy or sugar. This makes nitro cold brew coffee a favorite for those that want to live a healthy lifestyle by cutting down their sugar intake.

Besides adding a hint of sweetness, ground and brewed cold coffee also has an enhanced flavor and aroma. Hence, it is a worthy investment for enjoying a quality cup of coffee.

Hence, nitro cold brew coffee can be an excellent choice for anyone that wants to boost their metabolism and athletic performance. However, the side effects of the same should not be ignored.

What’s more, this enhances the taste and makes nitro coffee less bitter. It has health benefits such as preventing stomach and digestive problems. On the downside, nitro compound lacks beneficial compounds like chlorogenic acid, with numerous health benefits.

Nitro Brew Cold Coffee vs. Cold Brew: How Do They Differ?

Both nitro brew cold coffee and cold brew are similar in how they are first made. They are both cold-brewed from cold or room-tempered water and allowed to steep for 12 to 24 hours in a cool, dark place.

Here are some of the health benefits of drinking nitro coffee.

The high concentration of coffee grounds in nitro coffee makes it an excellent choice for anyone that wants to boost their brain and metabolism. It promotes blood circulation in the brain, allowing your mind to work faster and more efficiently.

The concentration of caffeine in nitro coffee also boosts energy and can enhance your physical performance. However, you should note that the amount of caffeine differs from one coffee maker to another, and the effects may be different.

Your body needs oxidants to protect your cells from oxidative stress and radical damage. Otherwise, you may be prone to cancer and cardiovascular diseases. The good news is that nitro cold brew coffee has high antioxidants since it is not exposed to air and high temperatures for extended periods.

The coffee beans are not constantly exposed to oxygen, which helps the coffee retain its oxidants. Hence, it is a good way to boost your antioxidants.

If you want to lose weight, a low-calorie drink like nitro coffee is an excellent choice. Unlike other coffee beverages, this type of coffee has fewer calories because of its significantly lower sugar and cream content.

It also promotes weight loss by increasing the metabolic rate so that more food is processed and less fat is stored. Besides, it is a great pre and post-workout beverage, thanks to its high caffeine concentration. Not only does it boost an athlete’s metabolism before a workout, but it also promotes the burning of calories after a workout.

Nitro coffee can help reduce and manage diabetes since it has its natural sweetness and does not require added sugars. It is also a healthy way to prevent different cancers such as gastric and lung cancer. This is primarily because it is high in antioxidants.

By lowering the risks of severe diseases like type 2 diabetes and liver diseases, other studies have established that coffee can help prolong one’s life. Besides, it is also believed that regular intake of nitro coffee can lower the risk of deaths caused by accidents, cardiovascular diseases, infections, strokes, and respiratory diseases.

Taking a cup of nitro cold brew coffee in the market is a brilliant way to kickstart your day in high energy levels. Unlike other types of coffee, it has a high caffeine concentration that can boost your energy and prevent a sluggish and foggy mind.

Some people are allergic to regular coffee, especially those that suffer from digestive issues such as reflux or hyperacidity. This is because other types of coffee may contain artificial creams and dairy that can lead to digestion complications.

On the other hand, nitro cold brew coffee is entirely natural and does not need artificial creams or dairy to achieve the desired taste. For this reason, it is a good coffee alternative for anyone that craves a natural and sweet creamy drink.

Everything that has benefits also has drawbacks, and the nitro cold brew coffee is no exception. Here are the adverse effects of nitro coffee:

The other major issue of taking elevated levels of nitro coffee is that it increases high blood pressure. Nitro coffee is responsible for boosting your heartbeat rate and metabolism, which can drastically increase your pressure.

Although nitro coffee can boost your energy, it may increase anxiety levels when taken continuously. The high caffeine concentration can affect your mood, hormones, and neurotransmitters, causing your anxiety levels to shoot.

4. It Can Cause Glaucoma

If you take nitro coffee regularly, you are likely to get Glaucoma. This is an eye condition that comes from increased pressure in the eyes. When you have this condition, you will feel tension in your eyes hours several minutes after having a cup of nitro brew.

Nevertheless, you should be careful when ordering from certain restaurants and coffee shops since they add sweet milk or cream to their nitro coffees.

Nitro cold brew coffee is also okay if you observe a keto diet. Usually, a keto diet has high fat, moderate protein, and low carb. Nitro coffee has zero sugar, calories, and carbohydrates and can help to keep you in ketosis. However, you should be careful when buying from shops that add cream or sugar to their nitro coffees.

How to Make Nitro Cold Brew at Home

Nitro coffee has a high price tag and can cost as much as $5 or even more. This is also true for cold brew coffees that are sold at supermarkets. For this reason, most people prefer to make their own nitro cold brew coffee at home.

To make nitro brew coffee at home, you don’t need commercial-grade equipment like those found in coffee shops and restaurants. You can still do it with your coffee machine at home. Here is what you will need.

If you are looking to make nitro brew coffee at home, here are steps to follow:

Step 2: Create a Mixture of the Coffee Grounds with Cold Water

In a jar or airtight container, mix 1/3 cup of coffee grounds and 1-1/2 cups of filtered cold or room temperature water. Make sure that the container used is airtight to prevent oxidization, making the coffee brew lose its flavor. Besides, a French pass works best to avoid excess air.

Step 3: Filter Out the Coffee Grounds

Use a fine mesh filter with a paper coffee filter, cheesecloth, or nut milk bag lining, to filter out the coffee grounds. This will leave you with cold-brew coffee concentrate, which should be stored in an airtight container and placed in the refrigerator for about ten days.

Step 5: Infuse the Mixture with Nitrogen

Now that you have your cold-brew coffee, it is time to infuse it with nitrogen. Pour the cold brew into a whipped cream dispenser and ensure that it is sealed. Afterward, use one nitrogen cartridge to charge and shake the canister for about 30 seconds. Wait for another 30 seconds until the canister feels cold, as this means that your nitro cold coffee is ready.

Serve your nitro coffee into a pint glass. Hold the glass at a slight angle and pour the coffee through the spout.

Now that you know what nitro cold brew coffee is, head down to a local coffee shop or make a cup at home. Whichever route you take, you will enjoy a smooth mouthfeel, iced cold, and delicious coffee unlike what you are used to in regular coffee.